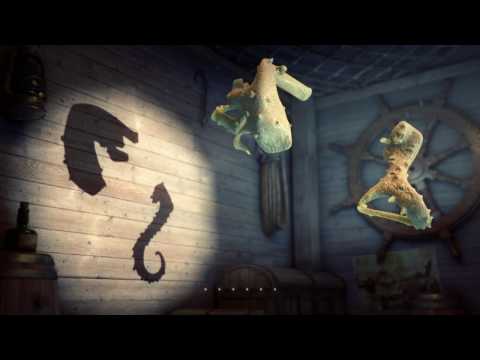 Have you ever played Resident Evil VII? Do you remember the part where you use the blocks to match the shadow of a bird to open a secret passage? Well, Shadowmatic is exactly that – you must rotate abstract objects to find recognizable silhouettes in projected shadows, and as simple as that may sound, it is quite simply put, captivating.

Weighing just a little more than 200MB, it certainly isn’t a light game. That’s mainly due to its stunning graphics. As you see in the video above, Triada Studios did a fantastic job with the visuals and the 3D lighting effects, and not too surprisingly, that’s because the company usually specializes in 3D graphics in commercials and custom video projects. Indeed, Shadowmatic – which saw its debut on iOS more than two years ago – is the first Android game to be released by Triada.

The goal of the game is straightforward: you manipulate the abstract objects that are given to you in order to align them to create recognizable silhouettes in projected shadows, relevant to the surrounding environment. For instance, it could be a shadow of a seahorse inside a boat or a shadow of a toy ship inside a baby’s room. The goal may be self-explanatory, but the process can be quite challenging. The puzzles require advanced spatial manipulation and lots of creativity, and the difficulty increases as you advance further.

The goal may be self-explanatory, but the process can be quite challenging. The puzzles require advanced spatial manipulation and lots of creativity, and the difficulty increases as you advance further.

The game itself is free, and you will be able to play the first 14 levels in 4 different environments without any charge. But if you want to unlock the entire game – more than 100 levels in 12 environments – then it will cost you $3, which is honestly not that bad. According to Triada Studios, the full game features:

If you’re bored and looking to play a simple but visually-stunning game that requires some brain power, head on over to the Play Store to download Shadowmatic: