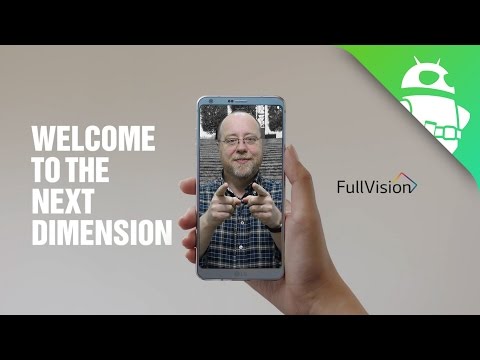 Now that LG has launched the G6 we have a couple of new phrases to add to our vocabularies, “18:9 aspect ratio” and “FullVision”. So what is an aspect ratio? What is 18:9? Why isn’t it called a 2:1 aspect ratio? And what does Charlie Chaplin have do to with it? Let me explain.

The screen dimensions of the Samsung Galaxy Note 5 means it has a 16:9 aspect ratio.

One of the key metrics about a smartphone is its screen size. The Google Pixel has a 5 inch display, the Huawei P10 has a 5.1 inch screen, the Samsung Galaxy Note 5 has a 5.7 inch display, and so on. These numbers aren’t the height or the width of the display, but rather the distance across the diagonal, from one corner to the other corner. It is also how we measure the size of TV screens.

So the diagonal is a good way to measure the size of a screen without having to worry about its exact width and height. The aspect ratio is the relationship between the width and the height, how much you get of one compared to the other. Since aspect ratio is related with video, it is calculated when the phone is in landscape. So 4.96 divided by 2.795 is actually 1.77 which when converted into a ratio is 16:9. Actually, 16 divided by 9 is 1.777777777…

Pythagoras teaches us that a square has the longest diagonal because the diagonal length is directly proportional to the length of both sides. On a smart phone one side is longer than the other. So the diagonal along with the aspect ratio describes the size and shape of the screen. A square screen would have an aspect ratio of 1:1, however it wouldn’t be very easy to hold in the hand.

The era of silent film

Way back at the beginning of movie making, back in the era of silent film, stars like Charlie Chaplin were recorded on 35mm film. Each frame of the film was 35mm wide and four perforations high. Due to the hole size and the distance between the perforations the resulting film had an aspect ratio of 4:3. At the dawn of the TV era this 4:3 standard continued as the standard however it was eventually superseded by other widescreen aspect ratios.

The reasons for the move to widescreen aspect ratios are many, some financial (like needing to differentiate between TV formats and cinema formats) and some technical. The widescreen formats for cinema eventually settled at 1.85:1 for normal widescreen and a 2.39:1 anamorphic widescreen. With television, the format remained at 4:3 for standard definition and 16:9 for HD. 1.85:1, the widescreen cinema format is quite close to the 1.77:1 (i.e. 16:9) for widescreen TV, in fact 1.86:1 is 16.7:9. This makes converting cinema releases to formats like Blu-ray quite easy.

The resolution of the LG G6’s display is 2880 by 1440 (2:1). LG said it drew inspiration for this format from Univisium, a 2:1 film format. At the moment the majority of widescreen content is shot in 1.85:1 or 16:9 which means that when you watch widescreen video on the G6 then you get black bars on the sides of the screen to fill out the space. However some media is now being recorded in 2:1. For example Jurassic World was shot in 2:1 and on Netfli show like House of Cards and Stranger Things are both 2:1.

Most apps should have no trouble adapting to the LG G6’s 18:9 format, as Android apps are designed to scale. For full screen apps LG has added an “App scaling” feature that lets you select the format you prefer for certain apps. You can switch between Compatibility (16:9), Standard (16.7:9) and Full Screen (18:9) with a swipe down from the top of the screen.

The screen on the LG G6 is 5.7 inches across the diagonal. Back to Pythagoras for a moment. The overall body height of the LG G6 is 5.86 inches (in portrait) and its width is 2.83 inches. Do the maths and you get 6.5 inches from corner to corner (remember it is a 5.7 inch screen plus bezels).

If you compare that to the LG G5, which was 5.88 inches by 2.91 inches, you will see that the diagonal body measurement of the G5 was also around 6.5 inches. However the G5 had a 5.3 inch display compared to the G6’s 5.7 inch. This is partly to do with the bezels but also because of the new aspect ratio. In fact the LG G6 is narrower than the Google Pixel XL, the Galaxy Note 5 and the Galaxy S7 edge.

It will be interesting to see how the 18:9 format will be used by other OEMs during the next year or two. Will it become the new default aspect ratio, it could, but it is too early to predict. The G6 is quite a big phone but the 18:9 aspect ratio will also work on smaller devices. That means that 5.2 and 5.5 inch devices that adopt this ratio will feel smaller in the hand and yet offer more display area. If then combine this with bezel-less displays or curved displays then we could witness a major shift away from 16:9 towards 2:1, or 18:9 or 48:24 or whatever marketing term the OEMs come up with!