What could be better than cats? Cats in vehicles battling it out 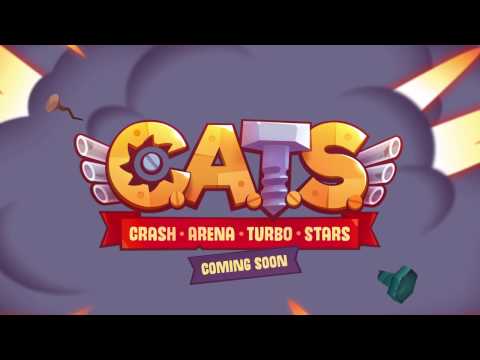 And that’s exactly what CATS: Crash Arena Turbo Stars is, the latest game from the creator of the insanely popular game Cut the Rope.

As you can see from the video above, the idea is pretty straightforward: you are a street cat, and you must build your own vehicle to fight with other vehicles. You start off with an unflattering wooden car, but as you progress, with either in-game currency or in-app purchases, you can upgrade your fleet with more menacing gadgets – from soda pop bottles to chainsaws. The goal? Destroy your opponents’ vehicles in one-on-ones to reach Crash Arena, the highest league in the game where you can become the champion.

The goal? Destroy your opponents’ vehicles in one-on-ones to reach Crash Arena, the highest league in the game where you can become the champion.

As the CEO of ZeptoLab Misha Lyalin explains, the idea is you have to build a vehicle that is not only powerful enough to destroy your opponent’s but also durable enough to withstand a lot of fights. Lyalin says that everyone in the company liked the game during its soft launch and that the company is confident enough to launch it worldwide now.

Semyon Voinov, creative director at ZeptoLab, explains just how the game came about:

As kids, many of us loved building tanks and battle cars from the stuff in our backyards to create epic toy battles, so we thought — why not turn it into a mobile game? And to make things even more fun, we decided to man our bots with cute — but highly competitive! — kittens. Who doesn’t like machines, explosions, and cats?

CATS: Crash Arena Turbo Stars will be available for download in April – not just for Android but also for iOS, Amazon, and Windows Phone – but if you are dying to try out ZeptoLab’s latest creation, you can click the link below to pre-register in the Google Play Store right now!

Pre-register for CATS on the Play Store

Are you excited about CATS: Crash Arena Turbo Stars? Let us know in the comment section below!