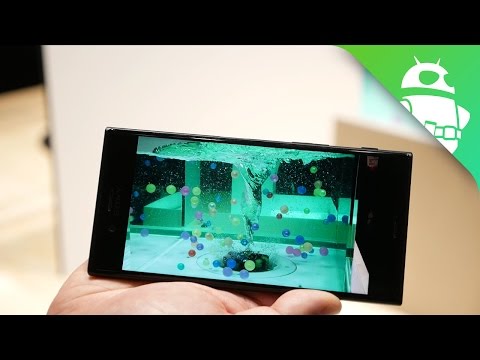 Now that the dust has kind of settled, we went back to the showroom floor during Mobile World Congress 2017 to check out more of the Sony Xperia XZ Premium. With all of the new phone announcements, you’d think that Sony’s flagship would’ve been lost in all of the commotion, but that’s going to be hardly the case – and trust us, there’s something to look forward to with this beastly smartphone!

From its premium design, to being a phone powered by Qualcomm’s latest generation Snapdragon 835 chip, and still one of the few in the market to boast a 4K HDR-ready display, the Sony Xperia XZ is just oozing with so much tech goodness that we can’t hardly wait to get it in our hands to check out even deeper. What we’re most impressed about after revisiting its booth at MWC 2017, however, is the new camera it’s packing along for the ride, a 19-megapixel camera with an Exmor RS sensor.

While the megapixel count is above what we’d tend to expect from other phones, we’re actually focused on its ability to capture mind-numbing slow-motion videos at 960 frames per second. That’s no joke people, especially when you think about what goes into all of that! Time is effectively slowed down enough to the point you see things that are usually unseen by the eye.

Now, to be fair, most people would assume that the camera records video files at the rate of 960 FPS, but that’s not really the case. Instead, as you’re shooting video footage, there’s another on-screen button that you’re required to tap on to enable the mode to kick in. In the camera interface, you just see this wiping motion on the screen to indicate the moment when the faster frame rate is enabled. So, unlike the procedure that most other phones use to execute slow motion, where we can just shoot the video first and then go back later to trim and select the portion we want to slow down, it’s all done on the fly here with the Xperia XZ Premium.

Still, the footage you can capture are just undeniably awe-inspiring. When we say slowing down time to see all the stuff that’s unseen, we mean every bit of it! Just take a look for yourself what kind of motion it’s able to capture. You’ll never look at a drop of liquid the same way every again! The only problem, though, is that you’ll need to be extra responsive when it comes timing, just because there’s just that short moment when the mode is enabled. Press the button too early or late, you might not have a second chance to capture it.