Samsung Galaxy Note 8: all the rumors in one place

In this post, which will be updated regularly, we take a closer look at the latest rumors surrounding Samsung’s upcoming flagship, the Galaxy Note 8.

The Galaxy Note 7 turned out to be a disaster for Samsung. The phone had major issues with its battery, that ultimately resulted in a total global recall. Nevertheless, the company will still release its successor, the highly anticipated Galaxy Note 8.

The Note series has always been popular among consumers, and it will be interesting to see if this changes in 2017 because of what happened with the Note 7. To make sure sales don’t suffer, Samsung’s upcoming smartphone has to bring a couple of new things to the table, while the tech giant must also convince people that the product is safe to use.

Although the smartphone is still a few months away, we already know quite a bit about it. In this post, we take a closer look at all the rumors surrounding the Galaxy Note 8 including when will it be released, what it will look like, how much it will set you back, and more. If you’re interested, keep reading. You’ll find all the info down below.

The Galaxy Note 7 was announced back in August 2016 and went on sale in the US in the same month. It looks like things won’t be much different this year. According to South Korean news website The Bell, Samsung will take the wraps off the Note 8 in mid-August. It’s likely that the smartphone will then go up for pre-order more or less right away, with sales officially kicking off a couple of weeks later.

It was initially anticipated that the Note 8 might launch at a later date, but The Bell claims that the tech giant has decided to speed things up a bit in order to get a head-start on the iPhone 8 series, which is expected to be revealed sometime in September.

However, a new report by SamMobile tells us a slightly different story, as it claims that the Note 8 just might be revealed at a later date after all. According to that story, Samsung may launch it at IFA in Berlin, which is scheduled to kick off on September 1.

Just like the Galaxy S8 series, the Note 8 is expected to sport a curved Super AMOLED display with a resolution of 2,960 x 1,440 pixels and 18.5:9 aspect ratio. However, it will be quite a bit bigger when compared to the one found on the Note 7, which features a 5.7-inch screen. The latest rumors suggest that the Note 8 will have either a 6.3- or a 6.4-inch display.

The upcoming phablet is rumored to be powered by either the latest Snapdragon 835 chipset or the upgraded (and unannounced) Snapdragon 836. Well, at least the US model. Samsung is also expected to offer a variant with the Exynos 8895 processor under the hood in Europe and other markets, which also powers the Galaxy S8.

The Note 8 will come with either 4 or 6 GB of RAM and should, according to most rumors, be equipped with a dual-camera setup on the back. The rumor mill has it that the device will sport a 12 MP wide-angle lens and a 13 MP telephoto lens that will offer a 3X optical zoom. It will also have an 8 MP selfie snapper on board.

It’s worth pointing out that the Note 8 might not be Samsung’s first smartphone with a dual-camera setup. That title may go to the upcoming Galaxy C10, which will likely be announced sometime in July.

Moving on to the fingerprint sensor, it looks like it won’t be built into the screen of the device as originally expected. According to a report by Naver, there are still various technical limitations when it comes to in-display fingerprint scanners, which is why Samsung will not use it on the Note 8. Interestingly, multiple reports claim Apple has managed to do so on the upcoming iPhone.

Vivo, not Samsung, could win the race to put fingerprint sensors into phone screens

Based on the fact that the Note 8 will feature small bezels around the screen (more on this later), the company won’t be able to mount the fingerprint sensor on the front either, as there’s just not enough room available below the screen. This means that once again the fingerprint scanner will likely be found on the back of the device. Let’s just hope that Samsung won’t place it right next to the camera like on the Galaxy S8 series.

Other things worth pointing out are that the Note 8 is expected to be waterproof (IP68), will naturally come equipped with the popular S Pen as well as an iris scanner, and pack at least a 3,500 mAh battery.

When it comes to software, the phone will run Android 7.1.1 Nougat with Samsung’s custom user interface on top. It will likely have a more fully-fledged version of Bixby on board, the company’s digital assistant that made its debut on the Galaxy S8. This means it’ll probably have the same dedicated Bixby button on the side, which not everyone is a fan of.

The Note 8 will look more or less the same as the Galaxy S8 series, with a few minor differences here and there. It will be a little bit bigger and should have a slightly redesigned back thanks to the dual-camera setup as well as a different fingerprint scanner location – we hope.

On the front, not much will change. This is probably considered a good thing by the majority of users, as the Galaxy S8 is a real stunner. Although the Note 8 will have a larger display than its predecessor, it won’t really be much bigger physically based on the small bezels surrounding the screen. Nevertheless, it will still technically be a phablet, meaning that it won’t be easy to use with just one hand.

The design of the device has potentially appeared in a recently leaked video showing what is claimed to be the front glass cover of the Note 8. As always, there’s a lot of debate about the veracity of the screen shown, but you can check it out for yourself below. 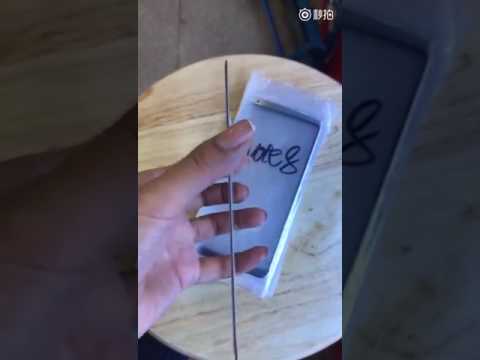 Although the leaks we’ve seen so far are far from convincing, it seems very likely that the Note 8 will look a lot like the Galaxy S8 series, only bigger. There’s really no need to change the design based on the fact that it has been so well received among consumers. We’d also expect the same software design as that found on the Galaxy S8.

The Galaxy Note series is known as being quite expensive. Unfortunately, that probably won’t change with the Note 8. There’s actually a very good chance that the phone will cost even more than the Note 7.

When the Note 7 launched in the US, it retailed for around $850 on average or $80 more than the unlocked version of the Galaxy S7 Edge. As the Galaxy S8 Plus is more expensive than its predecessor ($824.99 unlocked), it’s quite possible that Samsung will also increase the price of the Note 8.

There’s still a chance that you’ll be able to get the smartphone for around $850, but a price tag of $900 or maybe even a bit more seems like a safer bet at this point. If the base storage goes up and the phone gets an additional camera, Samsung might have no choice but to bump up the price.

That’s a lot of money to pay so it will be interesting to see how high the demand will be for the smartphone, especially considering the fact that Samsung’s reputation has taken a beating in the US as well as in other countries in the past year.

The good news is that Samsung will likely give out some free goodies along with the Note 8, at least during the pre-order period. The tech giant used this strategy last year when it offered products like a 256 GB microSD card, the Gear Fit 2, and the Gear VR headset for free with every purchase.

These are all the rumors regarding the Galaxy Note 8 we have come across so far. We’ll update this page as soon as we hear more.

Meanwhile, do let us know your thoughts on Samsung’s upcoming smartphone. Would you consider buying it if it will be more expensive than its predecessor? Let us know by posting a comment down below.