Following a soft-launch in the Netherlands a few weeks ago, Prison Architect: Mobile has now been confirmed for a spring launch and has received a brand new trailer.

The management simulation title sees players take control, or try to take control, of a maximum security prison, from construction to selecting facilities and taking care of the inmates. It’s a highly detailed and deep strategy game, if a little overwhelming for new players, and has received plenty praise since its PC release last year. Check it out in the mobile launch trailer below. 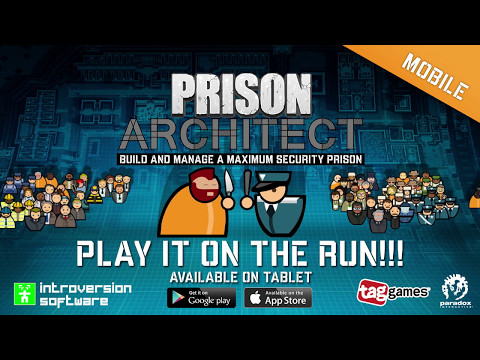 It may have cartoony graphics, but Prison Architect is not a game for children. Similar to 90’s management sims such as Theme Hospital and Constructor, it’s filled with dark humor — and at times it’s grim. It’s really grim.

Play Store reviews indicate that the game has so far been experiencing a few problems since its soft launch, as you might expect. Introversion Software isn’t exactly inexperienced when it comes to pre-release development, however — Prison Architect was on Steam Early Access for three years before its official launch — so you would expect these to be straightened out soon (though it’s not exactly clear how involved Introversion is in the project).

Prison Architect will be available free-to-play and is releasing only on Android and iOS tablets. With the spring release date confirmed, this means Paradox Interactive only has about another month to polish and ship it. We’ll let you know when it does.