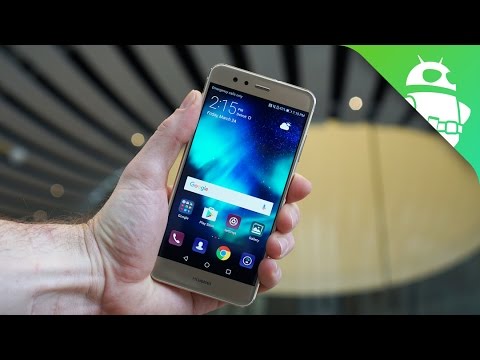 The Lite variants of the Huawei P series are more of their own sub-brand than they are variations on their flagship namesake. So when I went hands-on with the Huawei P10 Lite at an indoor skydiving center recently, I was expecting to see more of a successor to the Huawei P9 Lite than a device with any real resemblance to the new P10 family.

Huawei P10 and P10 Plus review

I already knew the phone looked a lot more like the P9 Lite than the P10 because it had actually been announced a few weeks ago. What I did find though was a software experience that’s almost identical to the P10, complete with Android 7.0, EMUI 5.1 and the option for an app drawer.

The P10 Lite is yet another nicely put together metal and glass phone from Huawei, even if it is pretty much the same design we’ve been seeing since the P8. It has the same chamfered edges and metal trim as previous P series phones and it sticks with a glass back panel, complete with rear-mounted fingerprint scanner.

A textured power button sits on the right hand side below the volume rocker and there’s a SIM and microSD tray on the left. There’s also a bottom-firing mono speaker, microUSB charging port, IR blaster and 3.5 mm headphone port.

The Lite in the name refers to the majority of the specs in the phone: a mid-range chipset, single, non-Leica branded camera, smaller internal storage and so on. The good news about watering those specs down a little is that you’ll pay significantly less for the P10 Lite than you would for the regular P10 or its larger sibling the P10 Plus.

At just €349 the P10 Lite is just half the price of the P10 Plus and €300 cheaper than the regular P10. While that price certainly fits the specs and style here, other than the software experience there’s nothing much on the outside to make this look like either other flagship device.

Instead, the design is almost exactly like the recently released P8 Lite (2017) which is also known as the P9 Lite (2017) in some regions. One thing the P10 Lite does inherit from its flagship brothers however is that nice shade of blue (there’s also a black, white and gold color).

The P10 Lite has a 5.2-inch Full HD IPS LCD display surrounded by really small bezels for a mid-range phone. In fact, the bezels on the P10 Lite match up almost exactly to those found on the flagship P10.

But the P10 Lite’s specs are essentially those of the entry level Huawei P9, minus the high end processor and dual Leica camera. The phone doesn’t feel as fast and fluid as the P10 but that’s because it’s rocking the Kirin 658 chipset rather than the 960 found in the P10 and P10 Plus. But the P10 Lite still has 4 GB of RAM and 32 GB of storage expandable via microSD. It also has dual-SIM support, a 3,000 mAh battery with 18W fast charging and NFC.

On the camera front there’s a single 12 MP shooter with f/2.2 aperture. There’s no fancy Leica partnership here so you won’t get quite the same results you’d get from the P10 or P10 Plus (or even the P9 for that matter), but you will still get similar image processing. Some of the photos I took turned out pretty good but don’t expect too much from moving subjects, poorly lit environments or the front-facing 8 MP camera.

While the P10 Lite doesn’t have the fancy B&W sensor for capturing fine detail like the P10, it does have a monochrome filter in the camera app (as well as a full manual mode).

I took the same photo on the 12 MP P10 Lite and on the 20 MP P10, and as you can see they’re not all that far apart, which is not bad considering the resolution difference, lack of Leica processing and a €300 price difference. Here’s a side-by-side comparison of a detail so you can compare apples to apples. The Huawei P10 is on the left.

Video quality is pretty decent but it lack image stabilization which becomes quite noticeable in certain conditions like when walking. The P10 Lite shoots up to Full HD quality at 60 frames per second.

The camera app is laid out the same as it is on other Huawei phones, so if you’re familiar with that you’ll be right at home. If you’re not then it’ll take a little getting used to because it’s far from intuitive. There are a few settings on the P10 that didn’t make it to the P10 Lite though, like wide aperture mode, the color saturation settings and night shot.

For the price the P10 Lite is a pretty good deal: it looks good, feels solid, takes OK photos and packs decent mid-range specs and a good sized battery. But the price has crept up €50 since the P9 Lite while the basic specs package hasn’t improved any more than you would expect it to in a year.

While the P10 Lite is probably still a good buy – just – its price point is starting to creep into the territory of much better equipped competition like the OnePlus 3T and Honor 8.

We’ll reserve our final judgement on the price performance ratio until the full review, but you can take a look at the Huawei P10 Lite for yourself when it hits stores at the end of the month across the UK and mainland Europe. No U.S. availability has yet been announced.