Hands on with the Kodak Ektra 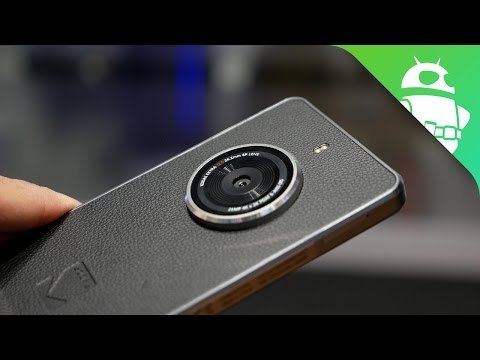 Kodak is synonymous with photography but isn’t the first name that come to mind when thinking about Android smartphones. Kodak is hoping to combine the best of both worlds with their first smartphone offering. While the device was announced last October and has been on sale in some European markets since December, this is the first time we got to spend some time with it. We go hands on with the Kodak Ektra!

Being a Kodak device, the key element of this phone is definitely  going to be the camera. The 21 MP rear camera supports 4K video and HDR, and come with optical image stabilization. It is instantly obvious that this is a phone meant for all the photography enthusiasts out there, a fact that is made even more evident when looking at the interface of the built-in camera application.

The interface is similar to what you’d find with any digital camera, and comes with the ability to easily switch between a variety of modes, including portrait, sport, bokeh, night, and more. There is also a robust manual mode, with granular control over aspects like the focus, ISO, and shutter speed. That said, the aperture cannot be adjusted, with the f/2.0 aperture what it is stuck at.

Switching over to the video mode, you do have the ability to shoot at resolutions up to 4K. There is no type of manual control available however, which is a shame, which is definitely something you’d expect to see with a device that touts its camera as its most important feature.

Even the design will remind you of a current generation digital shooter, with a cylindrical section at one end to hold on to the device, a leather-like backing that offers a lot of grip, and a dedicated camera shutter button. There is a significant camera hump as well, which adds to the overall camera-like look of the phone, but is something to be careful about when placing the phone on its back.

In terms of specifications, you mostly get mid-range fare here, including a 5-inch display with a 1080p resolution, a deca-core MediaTek Helio X-20 processor, 3 GB of RAM, 32 GB of internal storage, microSD card support, and a 3,000 mAh battery. The device is running Android 6.0 Marshmallow out of the box.

So there you have it for this quick look at the Kodak Ektra! The phone is available in Europe, and will make its way over to the US and Canada in April, with a hefty price tag of $550. As a smartphone, that price point is hard to justify when considering the specifications, and only if you are really into photography is this device going to be worth it.

Stay tuned with Android Authority as we continue to bring you more great coverage from MWC 2017!