Hands on with the BlackBerry KEYone 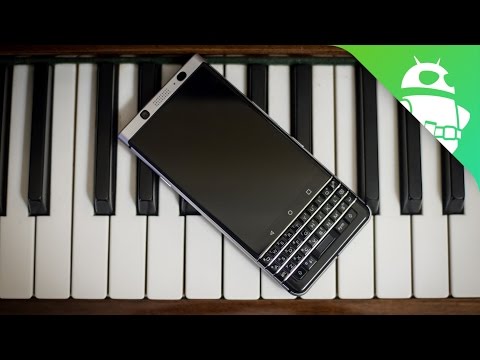 We are here at MWC 2017, and BlackBerry just took the wraps off of their latest Android smartphone offering, called the KEYone. Many of you may be familiar with this device if you followed our coverage from this year’s CES, with the KEYone being the “Mercury” phone that we got a sneak peak at. Apart from the name, we are now also privy to the specifications and features this device has to offer.

Here is your first look as we go hands on with the BlackBerry KEYone!

Like the BlackBerry DTEK 50 and DTEK 60 before it, the KEYone has been designed and manufactured by the Chinese company TCL communications. However, the KEYone looks like a quintessential BlackBerry smartphone, even more so than its two predecessors, with the return of a signature BlackBerry feature, a physical keyboard.

Taking a look at the specifications first, under the hood, the BlackBerry KEYone comes with a Qualcomm Snapdragon 625 processor, backed by the Adreno 506 GPU and 3 GB of RAM. This is a decidedly mid-range processing package, so the phone isn’t going to be particularly powerful.

It is very battery-efficient however, and when paired with a large 3,505 mAh battery, what we have is a recipe for some really impressive battery life. BlackBerry says that it is the biggest battery to ever be in one of their smartphones. By taking advantage of Qualcomm’s Quick Charge 3.0 technology, you will also be able to get up to 50% of power back after charging it for just 36 minutes.

The KEYone comes with a 12 MP rear camera with f/2.0 aperture, and 1.55 um pixel size, which should allow for decent performance in low light conditions. Up front is an 8 MP shooter. Below the front-facing camera is a 4.5-inch Full HD display with a 3:2 aspect ratio, which is a touchscreen, as expected.

You can also do your navigation using the physical keyboard that we all know and love from BlackBerry, and is truly one of the highlights of the KEYone. The keyboards features capacitive capabilities which allows you to use it as a trackpad to swipe left and right or up and down to navigate around the interface.

BlackBerry says that you can assign up to 52 shortcuts on this keyboard, which is far more than anyone might need. For example, you can long press the “i” button to launch Instagram, or the “f” key to open Facebook. There are a variety of shortcuts you can set up to help make your life easier. The device also comes with a fingerprint sensor with a rather unique implementation, with the scanner embedded into the physical space bar of the keyboard.

With this being a BlackBerry smartphone, you will get to take advantage of top notch security features with DTEK software. Yo ucan also find other top Blackberry apps like the Hub, which provides a simple way to consolidate all your emails, text messages, and social media accounts. At launch, the device will ship Android 7.1 Nougat on-board.

Looking at the design of the phone, it has not been changed from what we saw at the sneak peak back during CES. You get a sturdy aluminium frame and a soft touch leather-like backing that feels really comfortable in the hand and gives the phone a lot of grip.

The device is a little bit on the thicker side, but that provides plenty of space for a headphone jack that is placed up top. The USB Type-C port is at the bottom, the power button and volume rocker are on the left and right sides respectively. Right below the volume rocker is an user programmable button called the “convenience key,” that can be assigned to any shortcut or application of your choice.

So, there you have it for this quick look at the BlackBerry KEYone! The phone will be available unlocked in the US for the price of $549, as well as from various network carriers and other select channels, and you will be able to pick one up starting in April.

Stay tuned with Android Authority to know more about the BlackBerry KEYone, as well as for more fantastic coverage from MWC 2017!