OnLeaks and 91mobiles have joined forces and released a set of alleged renders, as well as a 360-degree video, of the upcoming Samsung Galaxy Note 8. They show the device from all angles leaving nothing to the imagination.

As you can see, the Note 8 resembles the Galaxy S8 series with its small bezels and curved screen. Although the back of the device does look a little bit different, mainly because of the protruding dual-camera setup. Unfortunately, the fingerprint scanner is positioned on the right side of the cameras just like on the Galaxy S8, which a lot of users don’t really like. You can check out the video as well as all the images down below. 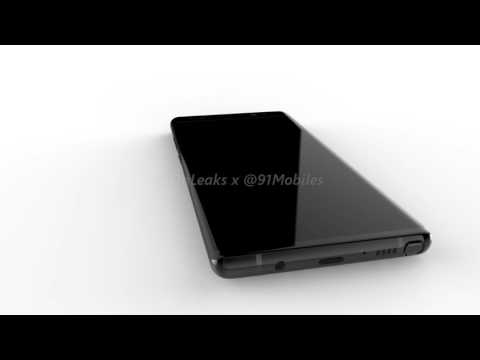 As expected, the Note 8 has a glass back, a metal frame, and comes equipped with the popular S Pen that pops out from the bottom of the device.

We already knew that the device will look quite similar to the Galaxy S8, given how its design has been well received by the majority of users. However, the placement of the fingerprint scanner is surprising, as that location doesn’t make a whole lot of sense. After all, the Note 8 is expected to feature a display with the size of at least 6.3-inches. This means that the scanner will be quite high up and could be hard to reach, especially for those who have smaller hands.

According to several reports, Samsung tried and failed to embed a fingerprint sensor in the display of the Galaxy S8 and Galaxy Note 8. Vivo and Apple are rumored to be leading the race to bring this feature to market.

Keep in mind that the images above aren’t official, which means that what you see may not be the final design of the Note 8. We won’t know for sure exactly what the phablet will look like until Samsung reveals it. This is expected to happen either in August or at the beginning of September. Meanwhile, feel free to check out the Samsung Galaxy Note 8 rumor roundup post to learn more about the upcoming smartphone.