The applock is perhaps the most rudimentary of security apps. The way it works is that it will lock up your other apps from prying eyes. That way you don’t have to worry about someone accessing your Facebook, gallery app, or banking app. They work best when paired with a lock screen lock to give you two layers of security. Which ones are worth getting? We’ll help you out with the best applocks for Android! Price: Free / Optional donation
DOWNLOAD ON GOOGLE PLAY
Applock by DoMobile Lab is definitely one of the best applocks out there. The app can do the basics like locking up specific apps. It can also lock up specific images and videos. It also includes uninstall protection, fingerprint support, and you can even lock stuff like incoming calls, uninstalling apps, and your various system functions like Bluetooth. The app is free to download and use. You can unlock the premium features either by enabling ads or paying for the premium version via a donation. It’s a strong app and one of our favorites.
DOWNLOAD ON GOOGLE PLAY Price: Free
DOWNLOAD ON GOOGLE PLAY
AppLock is another one of the better applocks on Android. Like you’ll see, it can lock pretty much any app on your phone. It also boasts the ability to lock photos and videos. The app features an invisible pattern lock as well as a random keyboard just in case someone is trying to peep over your shoulder. You’ll also get theming, the ability to replace the icon so you can hide the app, lock frequency, and more. It’ll even take a picture of people who don’t put the password in right. It’s completely free to download and use. That’s another good perk for this one.
DOWNLOAD ON GOOGLE PLAY Price: Free
DOWNLOAD ON GOOGLE PLAY
AppLock – Fingerprint Unlock is actually an app by Cheetah Mobile (makers of Clean Master). Unlike most of their apps, this one doesn’t include ads, an antivirus, booster features, or any nonsense like this. It’s just a simple applock that allows you to use your fingerprint scanner to lock apps. It also includes a feature that snaps a photo of the person trying to unlock your phone. The app can lock WiFi, Bluetooth, incoming calls, uninstallations, your settings, and more. It’s completely free to download and check out. However, given enough time, an attacker can bypass this one. It’s good for kids or friends, but might not work if your phone gets stolen.
DOWNLOAD ON GOOGLE PLAY Price: Free
DOWNLOAD ON GOOGLE PLAY
App Locker is a simply named app that works pretty well. It supports at pattern unlocking as well as fingerprint unlocking if your phone has that. It covers the basics like keeping your apps and settings safe and also works on images and video. This one also follows the Material Design guidelines fairly well. It looks beautiful and there are themes to change things up to suit your tastes. The developers do warn that it might not work on some Huawei and Xiaomi devices so do beware of that. Additionally, thieves can bypass this given enough time. Just something to keep in mind!
DOWNLOAD ON GOOGLE PLAY Price: Free / $0.99
DOWNLOAD ON GOOGLE PLAY
App Lock: Fingerprint Password is a simple and clean looking applock. It can lock up almost any app and you can use a PIN, pattern, or fingerprint to unlock them. The app also supports more than ten languages, has a variety of settings, and it can even be set to proactively protect new apps that you download. Aside from that, it’s one of the more simple applocks on Android. You can download the app for free, but you’ll have to pick up the pro version to get all of the features.
DOWNLOAD ON GOOGLE PLAY Price: Free
DOWNLOAD ON GOOGLE PLAY
Norton is a big name when it comes to antivirus apps. As it turns out, they also provide a free app lock app. It uses a four digit PIN, password, or pattern as its lock system. It also supports photos alongside apps. The app also comes with a recommendations list that lets you know which apps should be locked. That’s a great tool for those who want a more hands-off approach. Like most, it also takes a photo of anyone trying to get into your phone. It can be bypassed if the peeker is clever, but it’s still one of the more solid applocks.
DOWNLOAD ON GOOGLE PLAY Price: Free / $2.84
DOWNLOAD ON GOOGLE PLAY
Perfect App Lock is another one of the better applocks out there. It features the basics, including support for locking up WiFi, Bluetooth, and other toggles. It also tries to be more clever and than most applocks because it’ll do things like show fake error messages to try to trick people into thinking the problem is with the app they’re trying to open instead of being protected by an app lock. The free and paid versions provide the exact same features. The only difference is that the paid version doesn’t have advertising. It’s a solid all around option.
DOWNLOAD ON GOOGLE PLAY 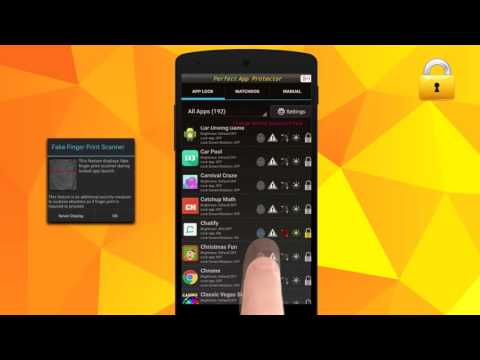 Price: Free
DOWNLOAD ON GOOGLE PLAY
Smart AppLock is another decent free applock option. It’ll lock up your apps and photos, including your settings, toggles, and phone app (for phone logs) to keep all of those safe. It disguises itself as a lock screen to make people think they’ve been bounced back from the home screens. Along with that, it provides auto-start upon reboot, break-in alerts, delayed app locking, and it has fingerprint scanner capabilities for Samsung devices. It’s a free option that is supported by advertising. The only downside is that it’s pretty easy to uninstall once someone figures out that it’s there.
DOWNLOAD ON GOOGLE PLAY Price: Free / $4.99
DOWNLOAD ON GOOGLE PLAY
SpSoft AppLock is a decent option for applocks. It features password, pattern, and fingerprint unlocking. That’s good news for those with fingerprint scanners. Like many, it’ll take a selfie of people who try to get into your apps and fail. It also has a bunch of fun little extras. You can make your pattern unlock show up on a grid of up to 18×18 instead of the traditional 3×3. It’ll also show a fake error message instead of a lock if you want it to. The app will even keep your screen on when using certain apps if you want. It’s a good option that also supports over 30 languages.
DOWNLOAD ON GOOGLE PLAY Price: Free with in-app purchases
DOWNLOAD ON GOOGLE PLAY
Vault is an applock that offers a bit more functionality. On top of the basic applock feature, it also locks your SMS, photos, videos, contacts, call logs, and other info. Additionally, it offers a privacy browser (which isn’t that great, just use Chrome’s Incognito mode), cloud backup for your SMS, and data transfer services. It can also create fake vaults to try to confuse those that are trying to snoop, a hidden mode to make it harder to find, and break-in alerts. It’s a good option for those looking for applocks that also do other things.
DOWNLOAD ON GOOGLE PLAY

Thank you for reading! Keep going with these app lists!

If we missed any of the best applocks for Android, tell us about them in the comments! To see our complete list of best app lists, click here.