Save $40 on the Echo Show 5, and more top Amazon Echo deals 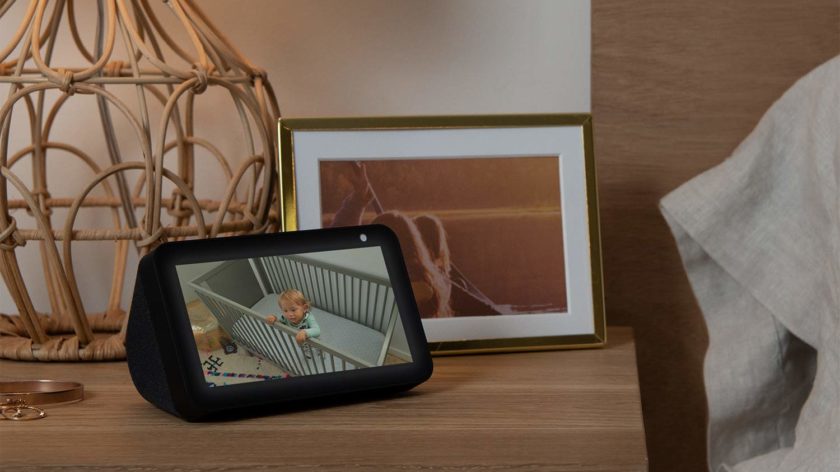 There is no denying Google and Amazon are leading the smart home race. If you’re keen to upgrade your home tech, it just might help to look through a few of the best Amazon Echo deals around right now.

There are thousands of skills and routines that you can run on an Amazon Echo, but the first step is finding the Echo device that’s right for you. Whether you want the stealthy Echo Dot or the handy screen on the Echo Show, there’s a good chance you can save a bit of money on the Echo of your choice.

Featured deal: Save $40 on an Echo Show 5 to celebrate Woot’s birthday

Woot is turning 16, and although the idea of the website driving a car is scary, it’s offering some pretty great deals to help celebrate. For today only, July 15, you can snag an Amazon Echo Show for just $40 (50% off). It may be the smallest of the Echo Show displays, but it’s still a solid pick if you need to look up a recipe or check the weather.

Just like all Echo products, the Echo Show 5 is integrated with Alexa so that you can make the most of more than 80,000 helpful skills. You can do just about anything from programming a wake-up routine to grabbing lyrics for your next karaoke party.

The Echo Show 5 is perfect for the current socially distanced era too because you can make hands-free video calls to check in with loved ones in minutes. Your whole family can huddle around the screen and sing Happy Birthday to Woot if you really wanted to.

Say happy birthday to Woot with half off of an Echo Show 5! Whether you need it for YouTube tutorials or simply to check the weather, the Echo Show 5 helps to bring Alexa to life.

We’ll be sure to keep this list updated regularly. After all, Amazon tends to change deals at a moment’s notice. As of this latest update, there are savings across the board on Echo products. We’ve given you a good run down in the rest of the article, but you could just jump straight to browsing the deals directly on Amazon. 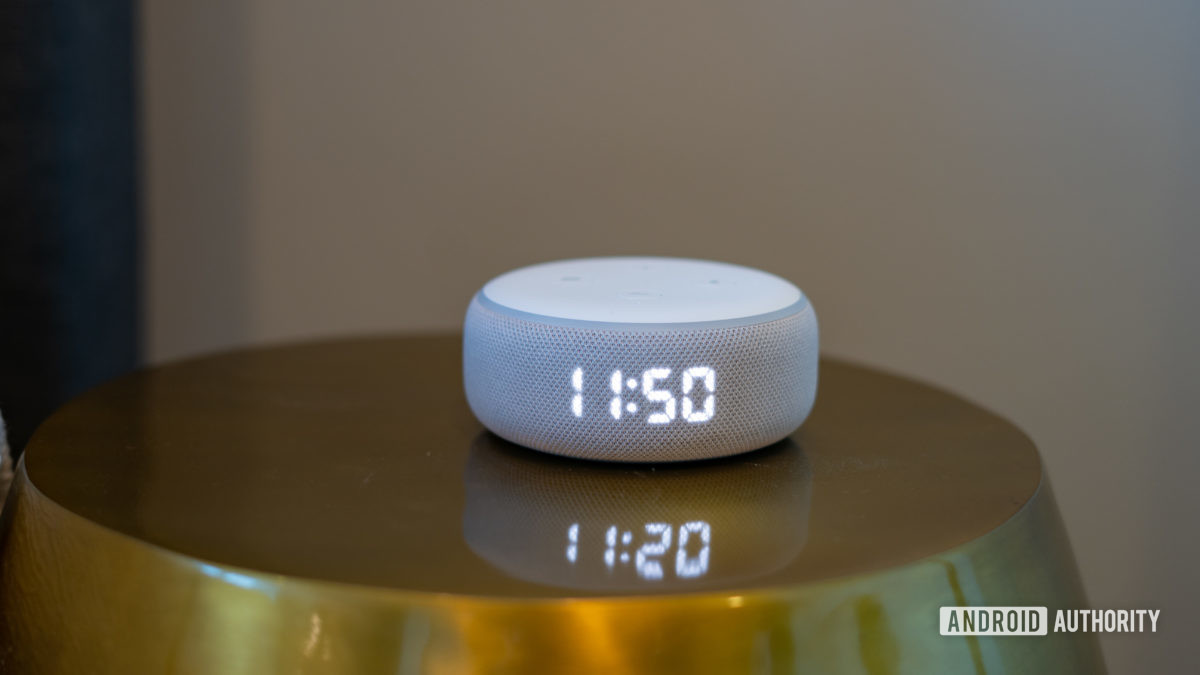 The Amazon Echo Dot is the most basic option if you’re looking for your first smart home device. It’s small and shaped like a hockey puck, and it adds Alexa-functionality to any room of your house. You can also choose from three different models: The original Echo Dot, the Echo Dot with a clock, and the Echo Dot Kids Edition.

The first two options are mainly self-explanatory but the Kids Edition actually packs some unique features. For starters, you can choose from a blue color and a rainbow finish to make the Echo Dot pop. Parents can also set limits on skills and the hours that kids can deliver commands.

Check out all three options at the widgets below. 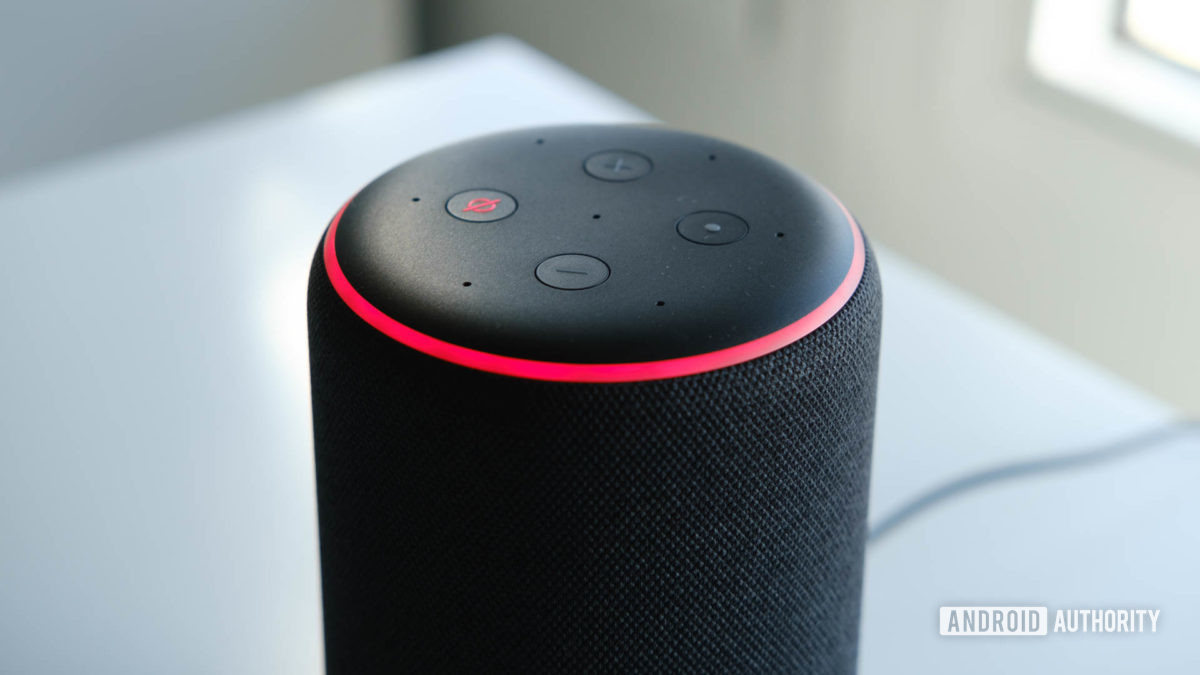 The Amazon Echo is the device that started it all, and now it’s on its third generation. The Echo has been redesigned with a soft-touch exterior that matches that of the Echo Dot, but it’s taller and wider than the hockey puck option. One of the main differences is that the standard Echo fits a larger speaker thanks to the larger size. That means that your Spotify and Pandora playlists can sound better than ever.

You can also use your network of Echo devices as an intercom system to broadcast messages throughout your house. The Amazon Echo comes in four different colors to match your decor.

Grab the latest version of the Echo that started it all. The original Echo has been redesigned with a soft-touch exterior that can look great in any room of the house. 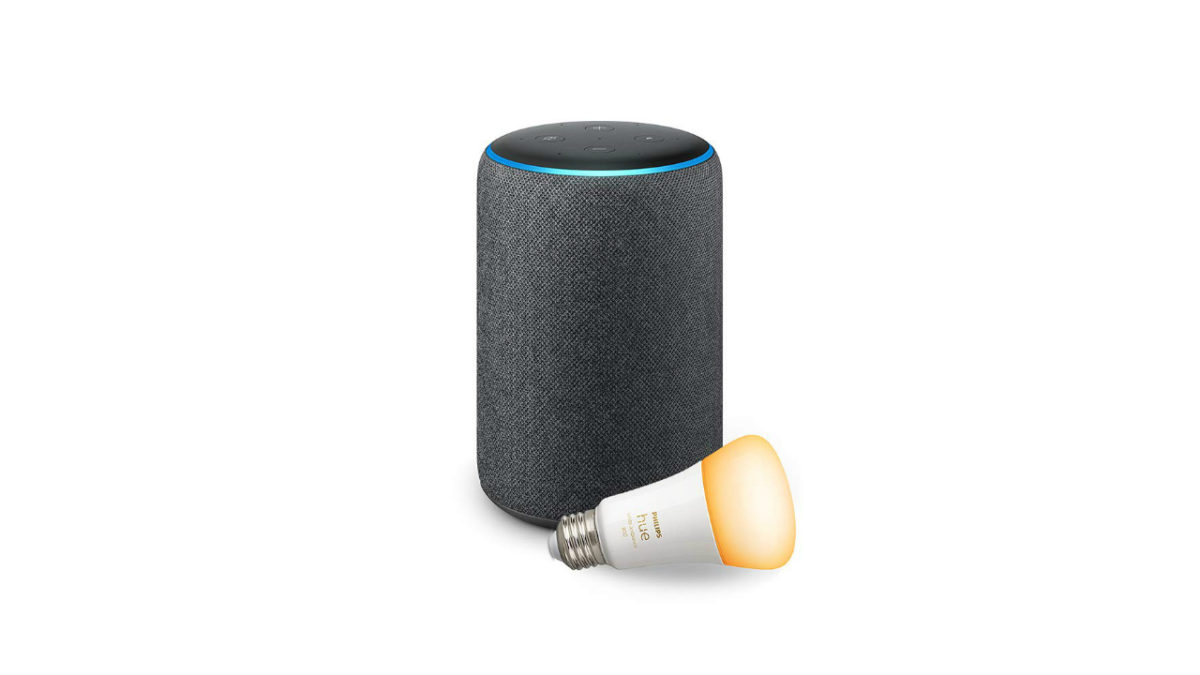 Even more powerful than the standard Amazon Echo is the Echo Plus. It packs the same laundry list of features and commands as the Echo but with the added benefit of a built-in Zigbee hub. Your Echo Plus can then scan your home for other Zigbee-enabled devices and save you the time of setting up each one individually.

Learn more and pick up an Echo Plus at one of its lowest-ever prices at the widget below.

Amazon Echo Plus (2nd Gen)
Includes a free Philips Hue Bulb
Add the power of Alexa to your home with the added benefit of a Zigbee hub. Set your smart devices up quickly and without extra hassle.

As part of Woot’s birthday celebration, you can also grab the older first-generation Echo Plus right here: 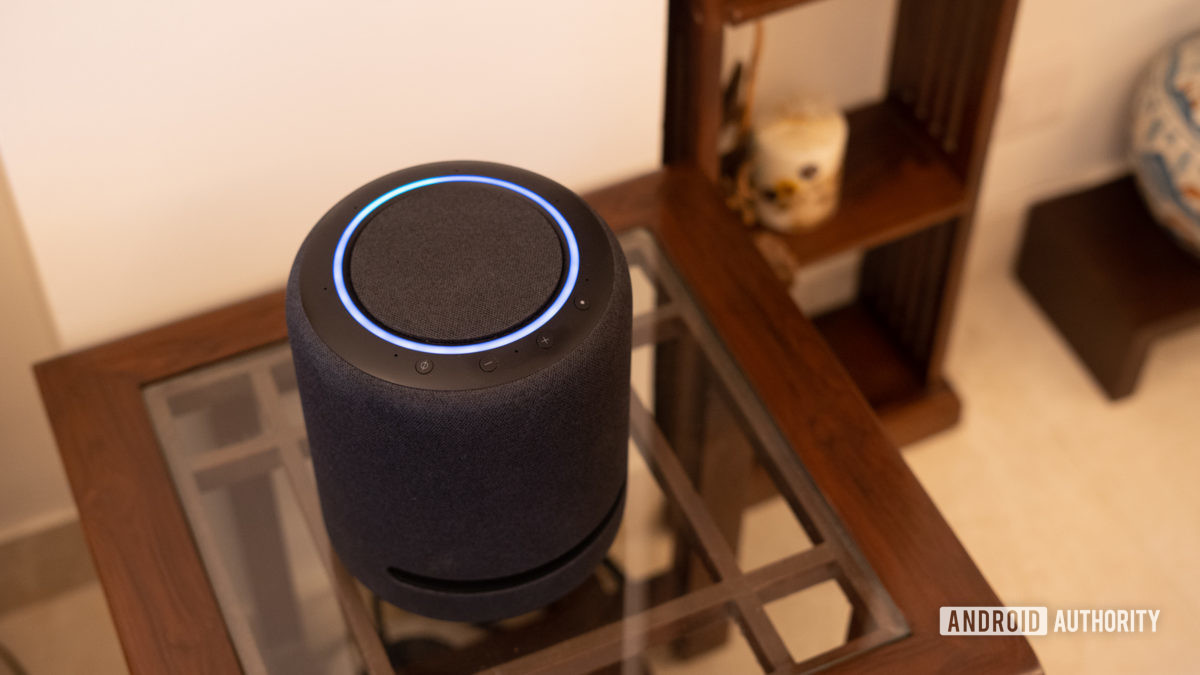 The Echo Studio is even larger and more powerful than the previous options above. It packs five strategically positioned speakers that can fill the room with sound. Enhanced with Dolby Atmos, the Echo Studio even plays music in formats that are mastered for 3D. It’s the perfect option to bring a party to life and you can even connect it to your Fire TV Stick for a surround sound experience.

The Echo Studio does not currently offer a special price, but you can get a free Philips Hue bulb when you purchase. Hit the widget below to check it out.

Take sound to the next level with the Amazon Echo Studio. Featuring five carefully angled speakers, the Echo Studio fills a room with sound like no other smart speaker. 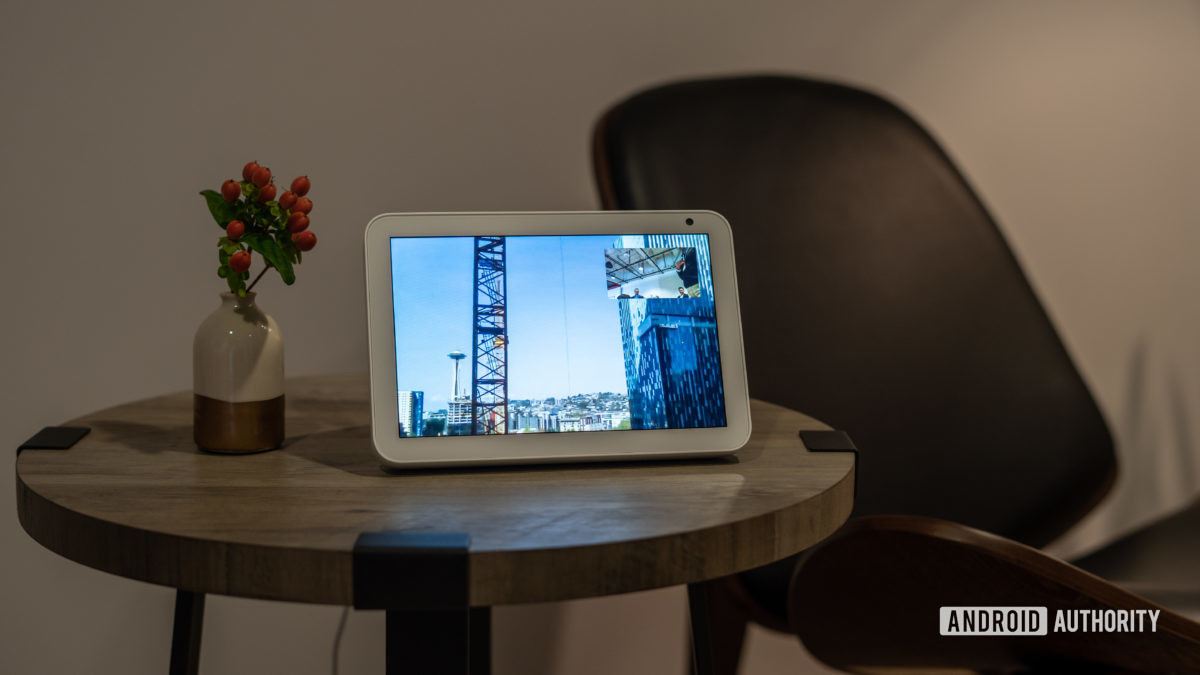 All of the options so far on the list have been cylindrical smart speakers with a primary emphasis on quality sound. That all changes with the added screen on the Echo Show. You may not want to watch a full-length movie on the Echo Show 5 or Echo Show 8, but both options are great for quick YouTube videos and news clips. You can even follow along with a recipe right in your kitchen.


If you follow the widgets above, you’ll see that you can pick up free or very cheap extras when you purchase an Echo Show on Amazon. For example, you can get the Echo Show 5 and a TP-Link simple set up smart plug for just $5 extra. So the bundle will work out to $64.99 (was $112.19). 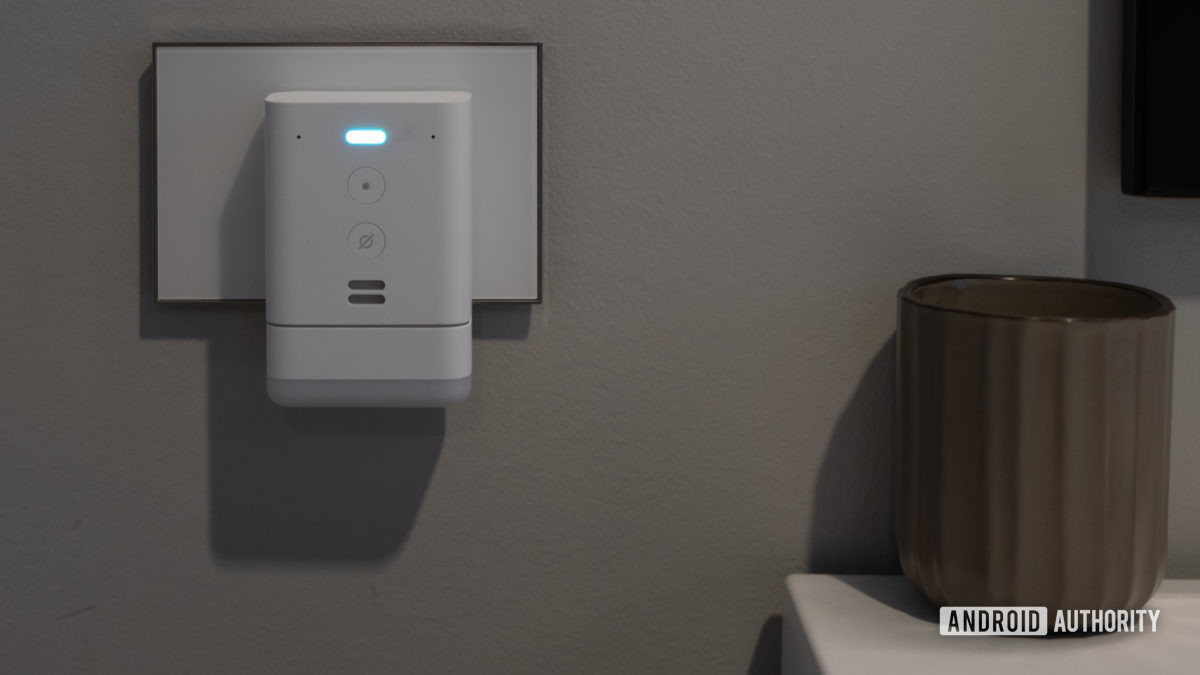 Phones have plenty of uses when you’re in the car, but there’s no good way to use them safely. That’s where Amazon’s Echo Auto comes in — you can make the most of Alexa’s abilities without picking up your device. The Echo Auto packs an impressive eight microphones so you should have no problem delivering voice commands even on the loudest roads. Right now you can pick it up for half the retail price as part of Woot’s birthday celebration.

Add some safety on the road with this hands-free Alexa device. Eight microphones make it easy to deliver commands on the loudest of roads while the device itself takes up nearly no space.

Smart speakers and displays aren’t the only options when it comes to the Amazon Echo family. Amazon also offers Alexa integrations in a variety of other devices, such as the Echo Wall Clock. The clock is actually a companion device, so you’ll have to have a standard speaker as well, but it allows you to display timers easily with just a glance at the clock.

Another option is the Echo Spot. It’s similar to the Echo Show but in a smaller round form. The Echo Spot features a handy 2.5-inch touchscreen and 1.4-inch speaker so you can always see and hear clearly.

Amazon also offers the Echo Flex for those situations where you just don’t have space for a full-size speaker. The Echo Flex is a handy mini plug-in smart speaker that hugs tight to your outlet. It might be the best option for a bathroom or another splash-prone area that you want to add a speaker.

One final Echo product to check out is Amazon’s Echo Buds. The Echo Buds are Amazon’s foray into the world of Assistant-powered wireless headphones. If Alexa is your go-to assistant, you might find that the Echo Buds are just what you’ve been looking for. The Echo Buds even offer five hours of playback on a single charge and up to 20 hours with the charging case.

Amazon Echo Buds
The convenience of Amazon Echo, pumped right into your ears
It only makes sense for Amazon to jump into the wireless earbuds game with a pair of its own. The Echo buds integrate with all of your favorite music apps and giving commands is as easy as can be.