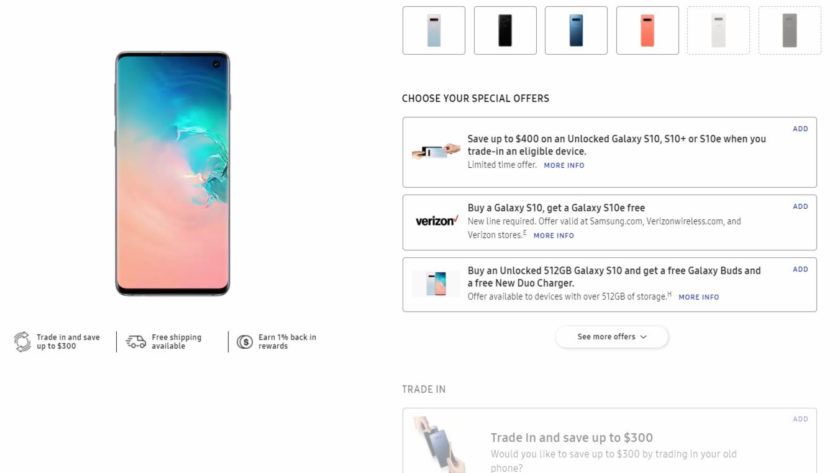 Once Samsung launched the Galaxy S10, S10 Plus, and S10e, the company decreased the maximum amount you could get from a trade-in from $550 to $300. The good news is that Samsung raised the trade-in maximum to $400, though there are some caveats.

Samsung losing more ground in India while Vivo gobbles it up

Samsung lost its top spot in India to Xiaomi a little over a year ago now (whether Samsung wants to admit it or not). Although there doesn’t appear to be any chance in the near …

First, the boosted trade-in value is only available if you buy an unlocked Galaxy S10, S10 Plus, or S10e. Don’t fret if you’re a Verizon, AT&T, T-Mobile, or Sprint customer — you can still get up to $300 off carrier versions when you trade in an eligible device.

Also, only the following smartphones net you the full $400 credit:

Finally, the new trade-in deal is available for a limited time in the U.S. Samsung didn’t say for how long the deal will last for, so you might want to buy the Galaxy S10 sooner than later if you want a higher trade-in offer.

Buy the Samsung Galaxy S10
NEXT: Reports suggest Samsung Galaxy Tab S5e has iPhone 4 antenna problem
Affiliate disclosure: We may receive compensation in connection with your purchase of products via links on this page. The compensation received will never influence the content, topics or posts made in this blog. See our disclosure policy for more details.