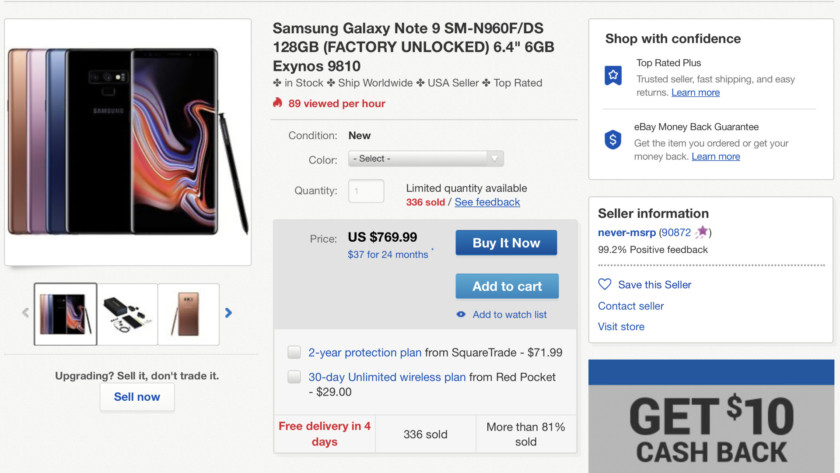 Even though the Samsung Galaxy Note 9 is one of the best Android smartphones available, we do not blame you if you skipped it over its $1,000 starting price. Thanks to eBay seller never-msrp, who marked the price down to $770.

That is the lowest price we have seen on the Galaxy Note 9 and saves you $230. That said, this is the international Galaxy Note 9 with 6GB of RAM and 128GB of expandable storage. The phone swaps out the Snapdragon 845 for Samsung’s own Exynos 9810 chipset, which should not be a problem in terms of performance.

Because this is the international version of the Galaxy Note 9, the phone only works on GSM networks like AT&T and T-Mobile. CDMA networks like Verizon and Sprint are out of the question. Also, the phone’s warranty will likely be invalid wherever you reside.

The Samsung Galaxy Note 9 is here and is currently up for pre-order in a lot of markets. Samsung has enjoyed immense success with the Galaxy Note series and the company is hoping to continue …

Finally, you might have some trouble with Samsung Pay depending on the region you live in. If you live in the U.S., Samsung Pay will likely not work. The Galaxy Note 9 has NFC, so Google Pay will not be an issue.

Even with the fine print, this is as good of a deal as you will get on the Galaxy Note 9. The $770 price tag puts it more affordable than the smaller Pixel 3, which starts at $799 unlocked. Whether you prefer Samsung’s smartphones over Google’s is a different question, but for the price, this is almost a no-brainer for those whose eyes are set on the Galaxy Note 9.

You can pick up the deal at the link below.