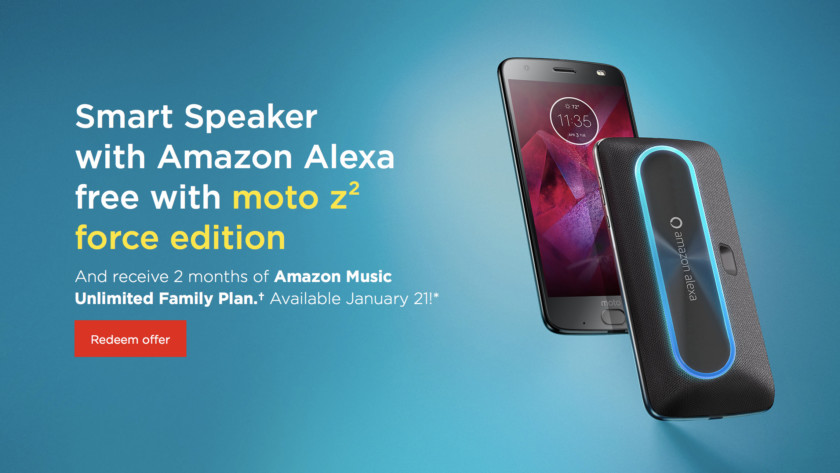 The Moto Z2 Force might be Motorola‘s current flagship smartphone, but it has not sold like it. Promotions tend to help with that, with the latest netting buyers a free Moto Mod Smart Speaker with Amazon Alexa and two months of Amazon Music Unlimited Family Plan.

In addition to buying from Motorola, you can buy the Moto Z2 Force from AT&T, T-Mobile, Sprint, US Cellular, Best Buy, and Verizon. Motorola still sells the Moto Z2 Force for $720 outright, while some carriers offer the phone at lower prices.

You must buy the phone between now and February 25 to qualify for the promotion. If you are eyeing the Verizon Moto Z2 Force variant, you’ll want to wait a few days— the promotion starts on January 25 for those owners.

Once you make your purchase, you have until March 27 to go online and redeem your free Amazon Alexa Moto Mod, which normally goes for $150. You should receive the free Moto Mod four to six weeks from whenever you redeem the offer.

Motorola in 2018: Bring on the wow factor

From the high-end, modular Z2 models to the more affordable Moto C devices, Lenovo-owned Motorola had a busy 2017. Its strategy resembled the machine gun approach on which Samsung relied for a long time. According …

As a quick recap, the Moto Z2 Force sports a 5.5-inch display with a Quad HD (2,560 x 1,440) resolution, Qualcomm’s Snapdragon 835 processor, 4 GB of RAM, 64 GB of storage, and magnetic connectors that support the Moto Mod ecosystem. While the Alexa-powered Smart Speaker Mod doesn’t seem like a great value for $150, it’s hard to argue with no price tag. Head to the link below for the deal!

Get this deal now