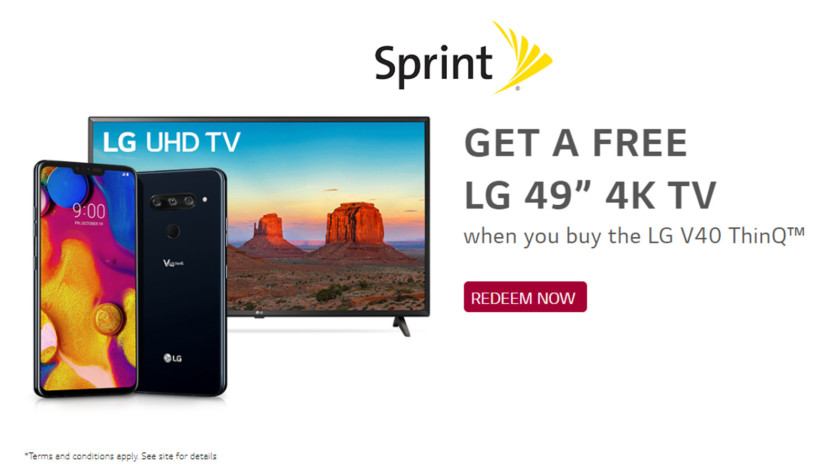 The LG V40 ThinQ brings quite a few innovative features to the table, but we understand if the high price puts you off a little. Thankfully, Sprint has a rather enticing deal if you’ve been thinking about the triple-camera flagship.

The U.S. carrier is giving away a free 49-inch 4K LED TV (model number 49UK6090PUA) to customers who purchase the LG V40 on a new line. To take advantage of the offer, you’ll either need to buy the phone outright or on a Sprint Flex 18-month lease.

To further sweeten the deal, Sprint is cutting down the V40’s lease price to $20 a month. So you’re basically getting a 4K TV and a top-end flagship for a paltry $20 a month.

To get in on the action, you’ll need to first buy the phone and activate it within seven days of purchasing. You’ll then have to claim the TV via the second button below (expect the TV to be delivered in six to eight weeks). The deal is valid until December 2, although you have until December 16 to claim your TV.

AI camera features are packed into so many smartphones these days, promising to make our pictures look better by understanding the scene we’re trying to capture. However, the improvements on offer are seldom properly explained, …

In any event, you’re getting a feature-filled smartphone if you opt for LG’s latest high-end device. The phone packs two cameras on the front and a rear-facing triple-camera setup (normal, wide, and telephoto cameras). Other noteworthy features include IP68 water/dust resistance, a headphone jack, quad-DAC audio hardware, and wireless charging.

Interested in this deal? Then you can buy the phone and claim your TV via the buttons below.