LaptopMag has started its first ever Android Cup this week, pitting 16 Android smartphones against each other in a bracket voted on by any user visiting the site.

The first match, if it can even be called a competition, is between the new HTC Incredible and the Samsung Behold II.

HTC’s Incredible has a 3.7-inch multi-touch AMOLED screen, a 1GHz Snapdragon processor, Android 2.1 (for now) and an 8MP camera. The phone also has the popular HTC Sense UI layer, and an optical trackpad.

The Behold II was Samsung’s second ever Android phone. It has a 3.2-inch AMOLED touchscreen with a small 480×320 resolution, a slower 528-MHz processor and a 5MP camera. The smartphone only runs Android 1.5, and has TouchWiz and Cube UI layers.

As of posting, the Incredible is winning 97 percent to 3 percent, with over 2300 votes cast. 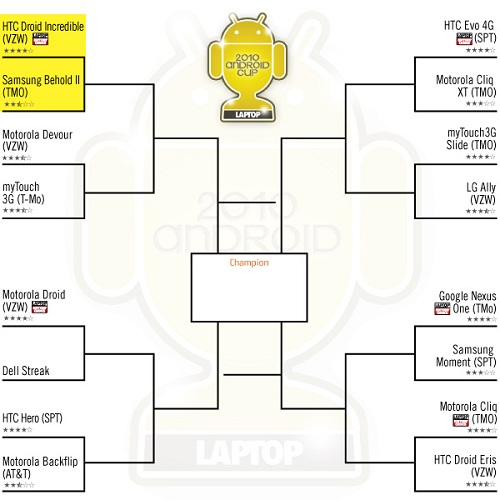