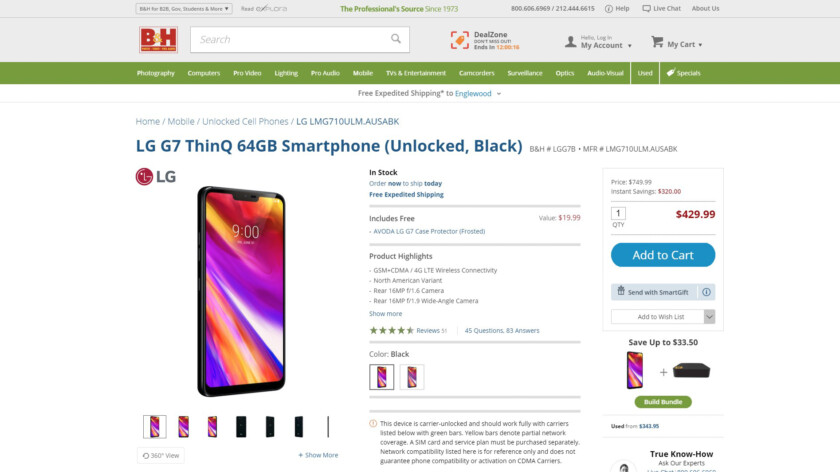 The LG G8 ThinQ is likely days away from being announced at MWC 2019, which means now is a great time to grab last year’s LG G7 ThinQ at a highly discounted price. For a limited time, grab an unlocked 64GB model for just $430 and save yourself over $320.

Despite being overshadowed by other flagships, the LG G7 ThinQ is not a bad phone. In addition to running similar or identical specs to almost every major Android smartphone released in 2018, the South Korean company’s phone includes a 32-bit DAC for music lovers, a quick access AI button for launching the Google Assistant, and so much more.

Below is a quick rundown of the LG G7 ThinQ’s specs:

The unlocked model on sale should be compatible with most GSM and CDMA networks. In the U.S., you should have no problem activating the handset on AT&T, Sprint, T-Mobile, or Verizon.

You can buy the LG G7 ThinQ from B&H Photo using the button below. Additionally, if you order now, B&H will throw in an AVODA frosted TPU case for free.

LG G7 ThinQ
Affiliate disclosure: We may receive compensation in connection with your purchase of products via links on this page. The compensation received will never influence the content, topics or posts made in this blog. See our disclosure policy for more details.