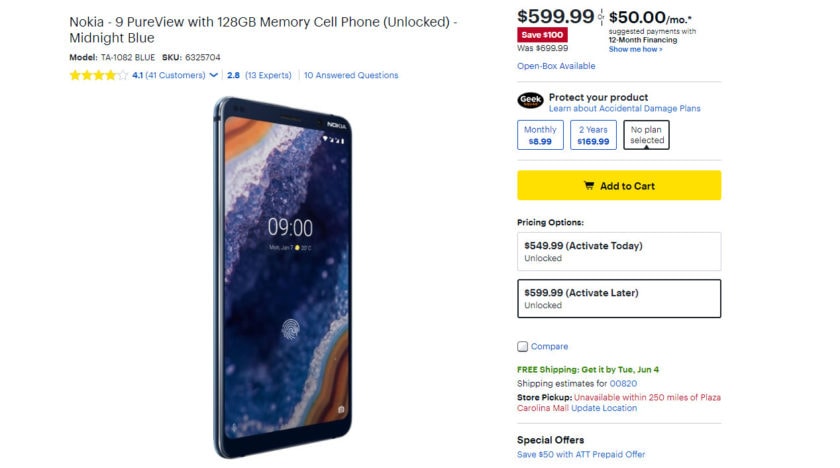 The Nokia 9 PureView is one of the most ambitious phones of the year, but we don’t blame you if you’ve been on the fence about buying one. Fortunately, Amazon and Best Buy are sweetening the deal by cutting $100 off the price for a limited time.

This deal, spotted by Droid-Life, means the Nokia 9 PureView can once again be purchased for $599. The Nokia-branded device was originally available at a launch price of $599, before leaping to $699. So it’s not an unprecedented deal, though Best Buy is offering a further $50 off if you immediately activate the device in-store on AT&T.

Amazon and Best Buy’s deal will be available until May 11, so you’ve still got some time to consider a purchase. But what are you getting for your cash though?

Nokia’s top-end device offers last year’s Snapdragon 845 flagship silicon, 6GB of RAM, and 128GB of fixed storage. Other specs include a 6-inch OLED display with an in-display fingerprint sensor, a 3,320mAh battery, and an IP67 design.

But the main attraction is the penta-camera setup on the rear, featuring three 12MP monochrome shooters and two 12MP color cameras. This setup allows for more detailed depth effects and better HDR images in theory.

Our own Eric Zeman was left pretty disappointed in his Nokia 9 PureView review. He praised the Android One software, hardware design, and display, but criticized the fingerprint sensor and lack of a 3.5mm port.

What you need to know about Light, the company behind Nokia 9 PureView cameras

It seems like just yesterday that dual cameras became popular, yet we’re already moving to triple and even quadruple camera setups. But HMD Global laughs in the face of these smartphones, as its Nokia 9 …

Eric’s main Nokia 9 PureView criticisms, however, were leveled against the camera experience. He noted that the camera app took two to five seconds to open, resulting in missed opportunities for photos. The pain didn’t end here, as the app frequently crashed and froze. Our reviewer also noted that photos were of an inconsistent quality, while low-light snaps were disappointing.

Still like the idea of a penta-camera smartphone? Then you can check out the Amazon and Best Buy deals via the buttons below, although it seems like the Amazon deal isn’t in effect just yet.