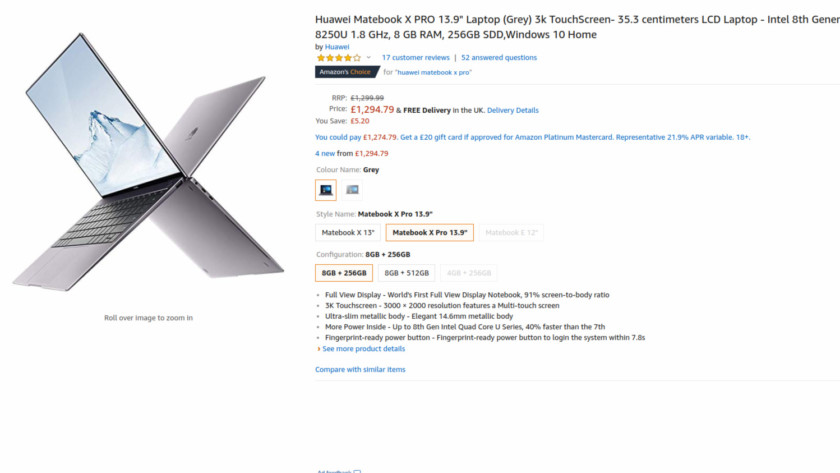 Huawei already announced its Black Friday deals for the U.S., but it did not want to leave the U.K. in the cold. That is why Huawei is offering a handful of discounts on its MateBook X Pro laptop.

According to Huawei, only the two MateBook X Pro variants with 256GB or 512GB of storage will get discounts. There is a version of the laptop with 16GB of RAM, but that variant will be left alone for Black Friday.

We have not heard of similar deals in other regions, so these appear to be U.K.-exclusive for the time being. We will update this post if that changes.

Even though they are modest discounts, keep in mind that the MateBook X Pro is arguably one of the best Windows laptops available. As a refresher, the MateBook X Pro features a 13.9-inch display with 3,000 x 2,000 resolution and narrow bezels, either the Intel Core i5-8250U for the 256GB version or Core i7-8550U for the 512GB version, 8GB of RAM, Nvidia’s GeForce MX150 graphics card, and a 57.4Wh battery that should deliver up to 12 hours of video playback.

As impressive as the specs are, what really turns heads is the middle function key on the keyboard that hides the 1-megapixel webcam. This is a nifty way to maintain a sense of privacy, though the angle of the webcam means that people on the other end will get a nice view of your nose hair and chin.