Deal: Grab the Google Pixel Slate for $200 off 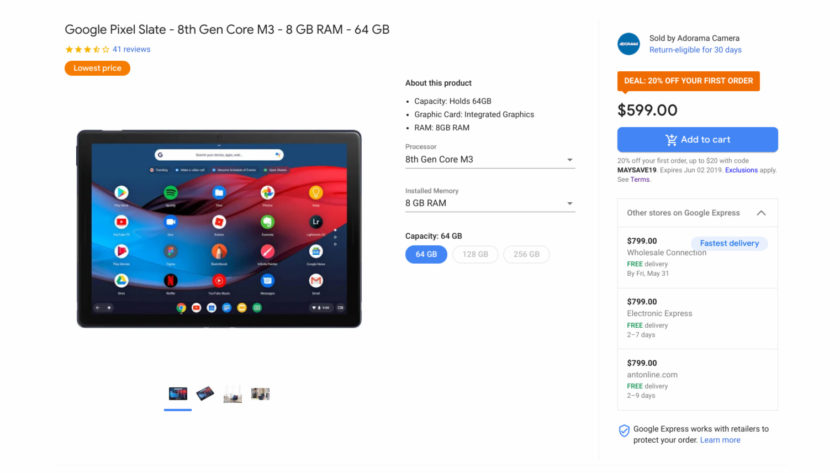 If you’re in the market for a Chrome OS tablet, the Google Pixel Slate is currently available for $200 off on Google Express.

The Pixel Slate is Google’s latest entry into the booming category of tablet-laptop hybrids. With Chrome OS, a detachable keyboard, a stylus, and support for Android apps, it’s trying to be a machine for all of …

Even though the Celeron version remains mysteriously absent, the Pixel Slate remains a good alternative to the Apple iPad Pro. To recap, all versions of the Pixel Slate feature a 12.3-inch IPS display with a 3,000 x 2,000 resolution, a fingerprint sensor embedded into the power button, 8MP rear and front-facing cameras, two USB-C ports.

You can use the Pixel Slate as a standalone tablet, thanks to the Chrome OS software and support for Android apps. That said, you can pick up the official Pixel Slate keyboard from Google to get some serious work done. You can also pick up the Pixel Pen to round out the experience and jot down some notes.

The Pixel Slate deal ends June 6 at 11:59PM PST, so make sure to grab it before time or stock runs out.