Deal: Grab the 256GB SanDisk microSD card for a crazy-low $55 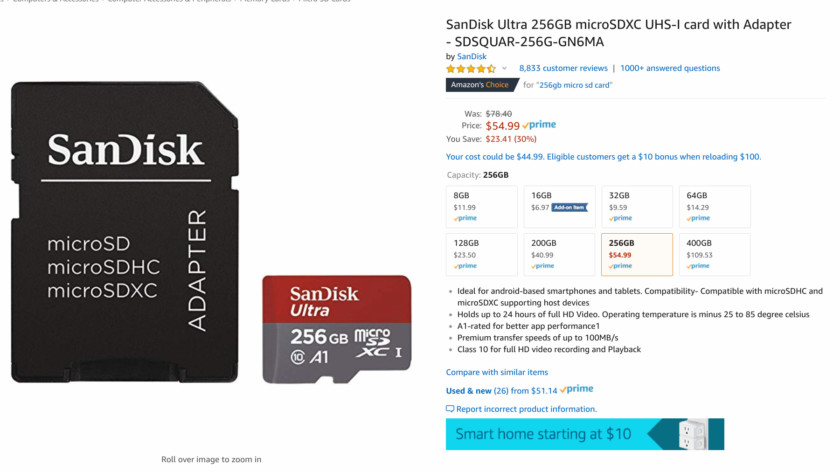 2018 continues to bless us all with great deals on storage as Amazon currently offers SanDisk’s 256GB Ultra A1 microSD card for $55. That is the lowest price we have seen for this card so far.

Our natural suggestion would be to use this card in your smartphone. Its A1 rating means the card delivers up to 100MB/s transfer speeds. Meanwhile, the Class 10 rating means you can record and playback footage in Full HD resolution. If you want 4K video recording and playback, you will have to step up to one of SanDisk’s Extreme microSD cards.

That said, the card’s 256GB of storage means you can store up to 24 hours of video at Full HD resolution. That is peace of mind that you normally have to pay a substantial amount for if you want additional internal storage for your smartphone. Thanks to the deal, you can get that peace of mind for only $55.

A few years ago,  phones with expandable memory were starting to become a dying breed. However, there are still many great phones that include microSD card slots so you can add as much as 512GB of …

The 256GB of storage will come in handy for more than just smartphones. You can also use the card in laptops and cameras, for example. For a card that initially sold for $200 almost two years ago, $55 for 256GB of storage is unheard of.

We do not know when this deal will end. However, you might want to pick the card up soon if you want to substantially increase the amount of storage on your device and not pay an arm and a leg for it.