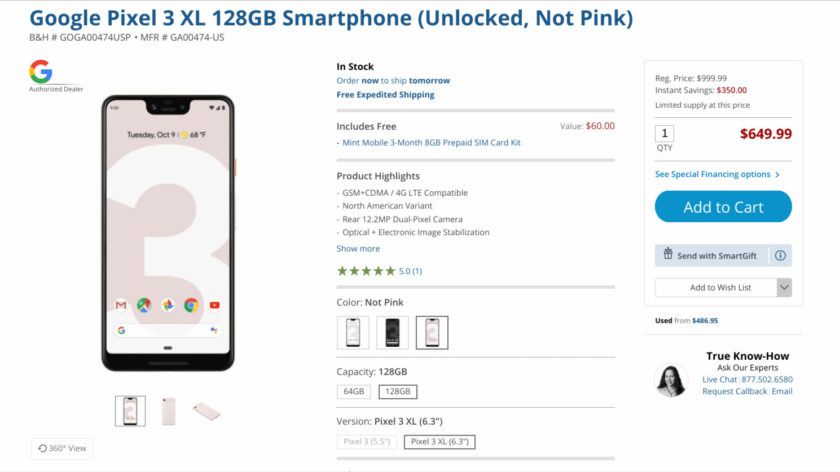 Just in time for Father’s Day, B&H and the Google Store are currently offering the Pixel 3 and Pixel 3 XL at discounted prices. The highlight deal is the 128GB version of the Google Pixel 3 XL in Not Pink for just $649.99 at B&H. That’s a whopping $350 off the phone’s regular price.

B&H also offers deals on other colors and the 64GB versions of Google’s two flagships.

Even in the face of the Samsung Galaxy S10, OnePlus 7 Pro, and Google’s own Pixel 3a, the Pixel 3 and Pixel 3 XL remain great choices mainly due to the 12MP rear camera. There’s only one rear camera, but the phones still rank near the top in terms of photo quality.

The rest of the phone is pretty good, too. As a refresher, the Pixel 3 features a 5.5-inch OLED display with Full HD+ resolution, dual 8MP front cameras, the Qualcomm Snapdragon 845 processor, 4GB of RAM, a 2,915mAh battery, and Android 9 Pie.

The Pixel 3 XL features identical specs, save for a larger 6.3-inch display with Quad HD+ resolution and a larger 3,430mAh battery.

You can grab the B&H and Google Store deals at the links below. The Google Store’s promotion ends June 19 at 11:59PM PST. B&H doesn’t state when its promotion will end, though phone purchases include a free three months of Mint SIM’s 8GB mobile plan.