Deal: Get the Moto Z3 for 50 percent off on Verizon 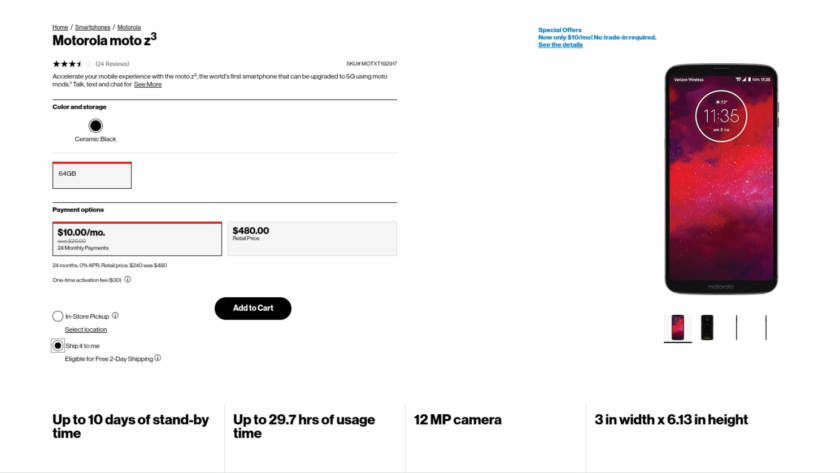 With October so far proving to be the predicted phonepocalypse that we all feared, everyone forgot about the Moto Z3. Stuck with last year’s internals and a price tag to match, the Moto Z3 looks to gain back some relevancy with Verizon’s deal that nets buyers a 50-percent discount.

From now through who knows when, Verizon offers the Moto Z3 for $10 a month for 24 months. That brings the total to $240 once the two years of payments are done, which is half of the Moto Z3’s normal $480 price tag. You still have to pay a one-time $30 activation fee, but you still save a fair amount of money if you are okay with monthly payments.

This might not be a new deal — it looks to have been around for about a week — but you can use the money you save to pick up the upcoming Moto Mod that brings 5G connectivity and will not be the last Moto Mod. Alternatively, you can pick up Moto Mods than range from a camera to a projector.

As a refresher, the Moto Z3 features a 6-inch 18:9 AMOLED display with a 2,160 x 1,080 resolution, dual 12-megapixel cameras around back, a side-mounted fingerprint sensor, Snapdragon 835, 4GB of RAM, 64GB of expandable storage, and a 3,000mAh battery. There is no headphone jack and no IP rating, though Bluetooth 5.0 and a splash-resistant coating might allay some frustrations.

If you are okay with last year’s flagship internals and do not want to break the bank on your next Android smartphone on Verizon, you can grab the discounted Moto Z3 at the link below.