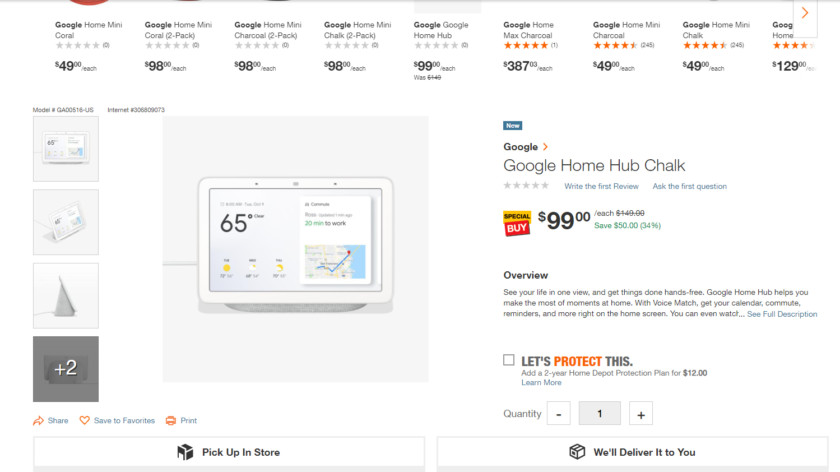 Update October 14, 2018 (12:33pm): And just like that, the deal is over! Hopefully, you took advantage of that massive discount while it was live.

Original post October 14, 2018 (12:19am): Leading up to Google’s fall hardware event, we leaked that the Home Hub, the search giant’s Smart Display, would only cost $149. Now that Google has made the device official, Home Depot is already selling it for 34 percent off ($99).

To recap, the Google Home Hub features a seven-inch display, can playback your favorite music and movies, control your smart home, and much more. Thanks to its small size and lack of a built-in camera, the Home Hub works perfectly for those who might want to use it in the bedroom and not worry about privacy issues.

Google Home Hub hands on: A home with a view

Like Apple, Google isn’t always first to market, but both companies always try to do things better than the other. What Google typically does better than most is software, but not necessarily this time. With the …

Weirdly enough, Google built the operating system for the Home Hub based on the cast platform instead of using Android Things which is found on other Smart Displays. While we don’t know what this might entail, it could mean that this device might have added functionality not found on the third-party devices.

You can buy the Home Hub in either chalk or charcoal for $99 by clicking on one of the buttons below. Home Depot’s website doesn’t state how long this discount will last so you better take advantage of it now before it’s gone.