Deal: Get the Core i7 Google Pixelbook for $456 off 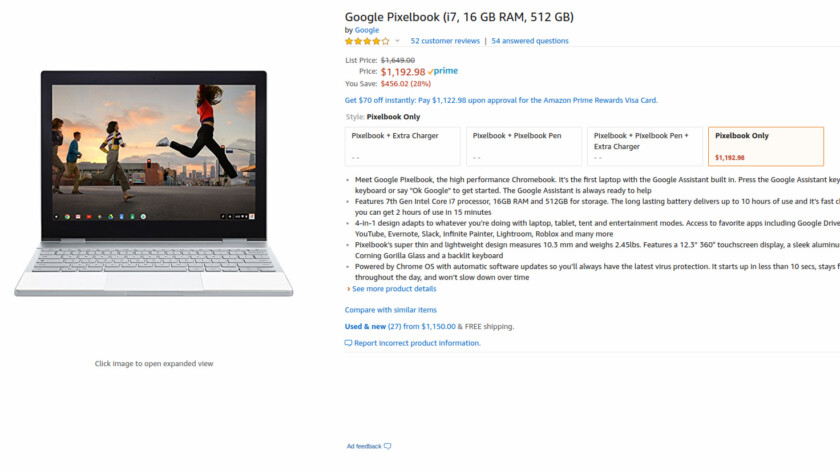 If you’re set on Chrome OS as your desktop OS of choice, today’s deal is quite the head-turner — Android Police noted that the top-tier Google Pixelbook model is $456 off on Amazon.

Keep in mind that Amazon doesn’t directly sell this version — it’s only available through third-party sellers. At the time of this writing, the cheapest top-tier Pixelbook with Amazon Prime shipping goes for $1,192.98. Other third-party sellers on Amazon are in the same pricing ballpark, something to note if you’re particular about who you buy your things from.

In May of 2011 the Chromebook line was first announced, launching to a mixed reception. Many felt a computer “limited to the web” would ultimately struggle to find a following. Despite this the Chromebook market …

To recap, this version of the Pixelbook features the dual-core Intel Core i7-7Y75, 16GB of RAM, and 512GB of storage. All Pixelbook versions feature a 12.3-inch LCD display with 2,400 x 1,600 resolution, one USB-C port on either side, a 360-degree hinge, a headphone jack, a glass trackpad, and a dedicated Google Assistant key on the bottom left of the keyboard.

The display supports Google’s Pixelbook Pen, which you can use to jot down notes or circle text and images to get search results through Google Assistant.

You can grab the i7 Pixelbook at the link below. We aren’t sure if this is a temporary discount, so grab it while you still can.