Deal: Buy a Samsung Galaxy Note 9 on Amazon, get a free Galaxy Tab A tablet 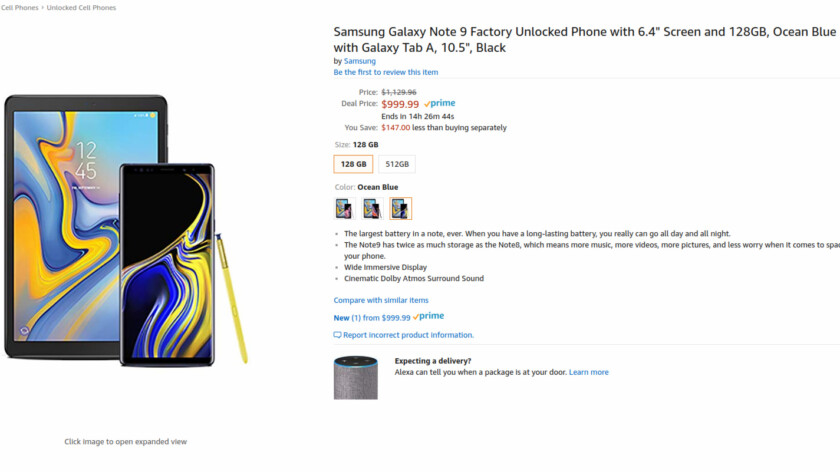 As part of its Deal of the Day promotion, Amazon is throwing in a free Samsung Galaxy Tab A tablet when you buy the unlocked Galaxy Note 9. The deal applies to the 128GB and 512GB variants that cost $999.99 and $1,049.99, respectively. The deal also applies to the Midnight Black, Lavender Purple, and Ocean Blue color choices.

There’s no discount on the Galaxy Note 9, but that doesn’t make the phone any less of a great choice. To recap, the Galaxy Note 9 features a 6.4-inch AMOLED display with 2,960 x 1,440 resolution, dual rear 12-megapixel cameras, Qualcomm Snapdragon 845 processor, either 6GB or 8GB of RAM, either 128GB or 512GB of storage, 4,000mAh battery, and One UI with Android 9 Pie. If you can think it, the Galaxy Note 9 probably has it.

Samsung is without a doubt the biggest name in the Android world, and if you are considering purchasing a new phone, logic dictates you may be looking to pick up a phone made by the Korean …

The good news is that the included Galaxy Tab A looks like a decent tablet. The device sports a 10.5-inch IPS display with 1,920 x 1,200 resolution, quad speakers, the Qualcomm Snapdragon 450 processor, 3GB of RAM, 32GB of expandable storage, a 7,300mAh battery, and Android 8.1 Oreo.

As of this writing, you have a little over 14 hours left until the deal goes away. If you’re in the market for a phone that packs in as many features as possible and you don’t mind a free tablet, you can check the deal out at the link below.