Deal: Activate the Pixel 3 on Verizon at any Target store, get a $150 Target gift card 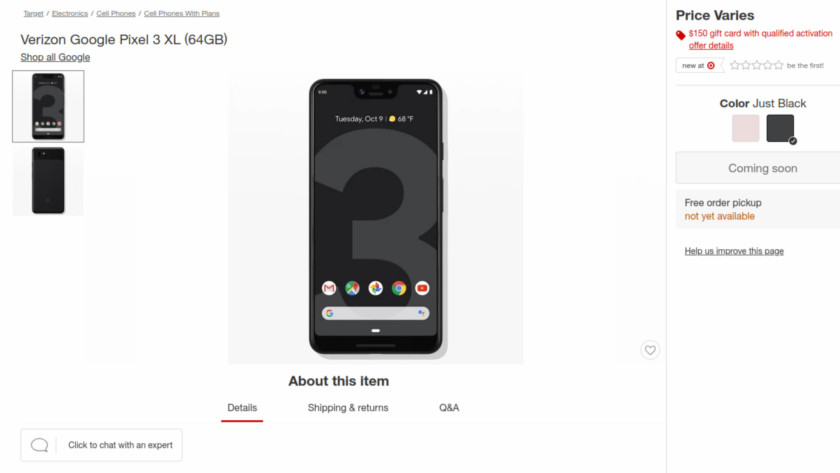 Even though the Google Pixel 3 and Pixel 3 XL do not officially launch for another three days, that’s not stopping Target from offering a $150 Target gift card if you buy either phone at any of its physical locations.

There is some fine print to look at. These are the Verizon versions of the Pixel 3 and Pixel 3 XL, which come with locked bootloaders. Normal people will likely not care about that, but those who like to load custom ROMs and firmware might want to look elsewhere.

We also do not know if it matters if you buy the phone outright or now. The deal implies that all you need to do is to activate either Pixel smartphone on Verizon, though these type of deals are only valid if people buy the phones with monthly payments.

Where to buy Pixel 3, Pixel Slate, Home Hub, and all Google’s new devices in the UK

The Google Pixel 3 and Google Pixel 3 XL are finally here! The search giant unveiled the third-generation Pixel phones at an event in New York on October 9, 2018, alongside a few …

Also keep in mind that the $150 Target gift card is only available in “select” stores, though Target did not say which stores. Even though you cannot get the gift card in the mail or online, you can reserve the Pixel 3 or Pixel 3 XL for in-store pick-up.

So long as you are already set on the Pixel 3, are or want to become a Verizon subscriber, and do not mind going to a Target store, this deal ain’t too shabby. You can use the $150 gift card to pick up some cases and even a wireless charger, since the Pixel 3 and Pixel 3 XL support wireless charging.

As a refresher, the Pixel 3 and Pixel 3 XL feature tall OLED displays, Snapdragon 845, 4GB of RAM, either 64GB or 128GB of non-expandable storage, and a 12.2-megapixel rear camera. Both phones launch October 18, though Target lists them as “coming soon.”

Either way, you can check out the deals at the links below.