Two 10.1-inch touchscreen tablet designs that run Google’s mobile Android software are on display at the Computex electronics show in Taipei, one from Foxconn Technology and the other by Hardkernel.

The tablet from Foxconn is a reference design made to show vendors what kind of tablets could be put into production quickly, and uses Nvidia’s Tegra chipset inside. Few details about the reference design were available. Foxconn is the trade name of Hon Hai Precision Industry, the world’s largest contract manufacturer of electronic devices.

The other tablet is a product from South Korea’s Hardkernel named the Odroid-T, and uses a Samsung Electronics’ S5PC110 1GHz chipset. The devices includes external GPS, Wi-Fi and Bluetooth 2.0, USB 2.0, a Micro-SD slot, standard SHCH slot and more. The company’s Web site says it will be available in June, but does not list a price.

Both devices used Android version 2.1 and the Hardkernel model ran more smoothly. The company appears to have tweaked the Android software to run better on tablet hardware. 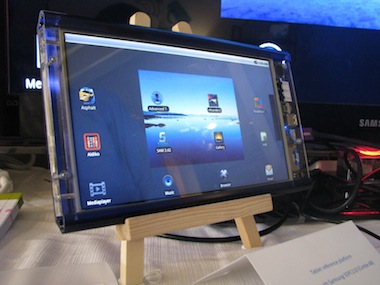 The chipsets on both devices were both designed for high definition and 3D video, which companies believe will be important for the tablet market because people will watch a lot of video on the devices.